Appraisal of the Area

24. Plan A shows the policy area and its relationship to the conservation area and the Site of Special Scientific Interest. Plan B illustrates the site's physical characteristics including built structures, the listed building, the footpath through the site and open space, along with photographs of the site and its wider contextual setting.

Appraisal of the Area: Site Character

25. Plan C provides an analysis of the area's character, identifying built and unbuilt features which contribute positively or negatively to the appearance and character of the area, along with significant views into and out of the area.

26. The area's northern boundary comprises nineteenth and twentieth century warehousing in active use and a long, wall-like strip of Victorian terrace housing which, together with the towering cliff on the northern side and the heavy traffic, provides for a tunnel-like effect along the road particularly for pedestrians. The green, open allotment area can be glimpsed through a series of alleyways, which punctuate the strong line of terracing. At the eastern end of the road modern industrial buildings sit tight on the roadside and create an inhospitable hard edge to the road and a disappointing access point through to the land beyond at what is a critical physical 'gateway' to the northern part of Rock Channel.

27. On its south-eastern side, the site is bounded by the river that is Rock Channel itself. Here the area has a more maritime character; a further strip of light industry, together with workshops, wharfs and moorings for fishing boats, and sporadic residential accommodation adjacent to the Channel, a mixture of uses with cultural and historical significance in the development of the town of Rye. However, public access to the riverside itself is limited here, and visual connections are equally poor.

28. The character of the site varies from the busy activity of industrial operations on the Jempsons/Bournes sites to the west, with associated bulky buildings and large service yards, through the more tranquil core of the site comprising the allotments and private dwellings, with limited through vehicular access, along to the intimate scale of the maritime related businesses and dwellings along the south-eastern edge of the site. From here the area, opens out to larger scale industrial buildings on the peninsula at the eastern end of the site.

29. Intrinsically, the site lacks legibility and orientation, particularly with regard to the river frontage, is spatially and functionally inhospitable to the public and to visitors. Its redeeming qualities, and ones which any redevelopment should seek to broadly retain, are the more intimate 'village' scale residential and commercial premises, whose ad hoc nature and close maritime associations give the area a distinctive charm and character.

30. The area's particular special interest is the open foreground to the town when seen from the south across Rock Channel that it presents, and the stark setting it provides for the Citadel. The area provides a key and distinctive physical contrast between the sharp cliff face with the town atop, and the low-lying reclaimed land to the south-east. The sporadic nature of the siting of those buildings on the site, together with their characteristic broadly low-lying forms, allows for good visual relief and physical distinction of the ancient Citadel, and of the cliffs on which it is built, in long views towards the town. 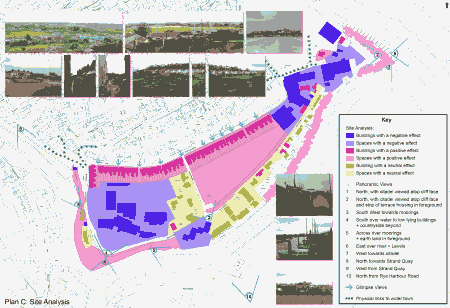