18. The visual appearance of the town of Rye is almost entirely a function of its unique geographical and geological situation. Positioned atop a rocky sandstone outcrop, the historic core of the town, generally known as the Citadel and defined by cliffs and remnants of the town wall, overlooks the flat level marshland that surrounds it to the north-east, east and south. Consequently the town possesses a distinctive outline in silhouette, presenting the appearance of an island rising on cliffs above the surrounding countryside.

19. The Rock Channel site lies on the southern floodplain of the town, on land historically reclaimed from the sea, and is consequently essentially flat. Physically, the Rock Channel area is cut off from the Citadel both as a result of the town's distinctive topography, and by the busy A259 that forms its northern boundary. Meanwhile, the area is bound to the south and west by water, namely Rock Channel itself to the south, and the River Tillingham to the west. As an area, the site is most closely linked to the Strand Quay area to the west, and the Salts and Fishing Quay to the east and north-east.

20. Rye's maritime connection has always been fundamental to its economic prosperity and social history. Its port was host to thriving international cross-sea trade during the medieval period together with associated shipbuilding industries and inshore distribution of goods via the river systems. Later, the town shifted from a busy trading port to a prosperous market town, still drawing on its maritime economy through the fishing industry.

21. Rock Channel was the town's main shipbuilding area, thriving in the 'golden age' of the late nineteenth century, but even launching, along with shipbuilding industries in Strand Quay, over 40 vessels, mainly trawlers for the North Sea ports, between 1900 and 1910.

22. As a result of the physical constraints of the town's site, changing land conditions and land reclamation has meant that nineteenth and twentieth century expansion of the town has taken place ever further away from the compact, hill-top citadel core. The South Undercliff terraces, including St Margaret's Terrace, were constructed at the end of the nineteenth century, bringing substantial residential accommodation onto the site.

23. With the decline of shipbuilding during the twentieth century, the area has become host to a variety of mainly commercial uses, including storage and warehousing, light manufacture, and a number of small, marine-related businesses. Meanwhile a number of smaller residential dwellings have developed on an ad hoc basis along the waterside and along Shipyard Lane, while later twentieth century development has been limited to one larger-scale residential development on the central-southern edge of the site. 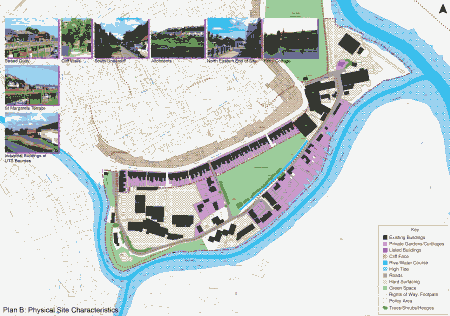