15.1 Rye is a small market town (with a population estimated in mid 2006 at 4,159) at the eastern end of the District which acts as a service centre for its rural hinterland which extends into the fringes of Ashford and Shepway districts.

15.2 The Local Plan's current planning strategy for Rye aims to support its market town role, including as a centre for employment, and recognise its unique historic, maritime and environmental qualities.

Policy RY1:Proposals for development and change in Rye should be compatible with and, wherever practicable, contribute positively to the following objectives:

(i) to maintain the small market town residential and employment functions together with its character;

(ii) to protect the unique historic Citadel and its landscape setting, particularly the levels surrounding the Citadel;

(iii) to maintain and enhance navigation on the River Rother and the viability of the Port of Rye as a harbour;

(iv) to enhance the commercial and tourism attractiveness of the Citadel and the wider area as far as is compatible with preserving its their character and environment; 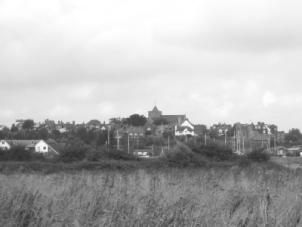 15.4 Future options for the town could aim to consolidate or even expand this market town role. Work undertaken for the Local Plan Inquiry supported the view that there is a need for further shopping floorspace in the town, specifically for convenience goods.

15.5 The retail capacity of the town will require further detailed assessment and analysis ahead of the next stage of the Core Strategy's preparation. The commercial activity in the town contributes to its sense of vibrancy.

15.6 Jobs in Rye are focused on the service, retail and tourism sectors. An issue for Rye may be the seasonality of tourism-related employment and the tendency for such work to be relatively low paid. Additionally, there is a high proportion of self employment with 1 in 4 Rye workers being self employed, which is perhaps a measure of the levels of entrepreneurship in the town.

15.8 The generally prosperous feel of the town is contrasted with some comparatively high deprivation levels in parts of the town revealed by the Index of Multiple Deprivation (2004). Levels of child poverty are a particular concern.

15.9 Primary school provision in Rye is currently being reviewed by East Sussex County Council. It is looking at a single new school option.

15.10 The Rye Local Area Transport Strategy (April 2003) identifies transportation problems experienced in the town and provides a framework for improvements in the short, medium and longer terms.

15.11 The town is served by both rail and trunk roads (A259) although their effectiveness as strategic transport links is constrained. Also, the A259, by virtue of its route through the town and the volumes and nature of traffic using it, acts a barrier to movements across parts of the town.

15.12 The Rye Tidal Walls Scheme is scheduled for completion in early 2008 although it may now be finished before the end of 2007. It will give those parts of the town to the west of the River Rother (and the Brede) protection from a 1 in 200 year tidal flooding event.

15.13 The consolidation of the Sites of Special Scientific Interest in the vicinity of Rye and Rye Harbour is a current proposal by English Nature.

15.14 In view of its sensitive landscape setting, historic core and accessibility limitations as well as the proximity of nationally and internationally important wildlife habitats and flooding considerations, it is not anticipated that the Core Strategy should propose that Rye should be a focus for high levels of future growth.

15.15 Equally, options for the future of Rye could not include a 'no change' option. It should be anticipated that national and regional planning policy will continue to support development on sites within the existing confines of settlements over the timeframe of the Core Strategy. Indeed, the analysis in the preceding section does reveal some need and opportunity for planned change in Rye.

15.16 A continuation of the existing Local Plan development strategy to cover the timeframe of the Core Strategy would constitute a medium growth option for the town with some new development planned.

15.17 This could bring with it the enhancement of its service centre role by providing, for example, increased employment opportunities or accessibility improvements.

15.18 In contrast, a lower growth option could largely limit development to infilling and development or redevelopment largely within the confines of the town.

15.19 The aim would be to make the best of any development opportunities within the town to consolidate both its role and its urban 'form'.

15.20 Such an approach is likely to add to the pressure for more intensive development and would limit, in particular, the scope to increase the supply of affordable housing in the town.

15.21 It may link with higher level growth options for Bexhill and the fringes of Hastings.

(15) Question 18 - Should the current objectives for Rye be carried forwarded or amended and, if so, in what way?

In considering this, you are invited to comment specifically on:

Should the strategy also include any of the following options?

(17) Question 19 - Which development option is most appropriate and why?

In considering this, you are invited to comment specifically on: