APPENDIX 2 - SUMMARY OF 'ROTHER IN PROFILE'

For the greater part, Rother is rural in character, forming the south-eastern part of the High Weald. However, it also embraces low-lying coastal areas at both the eastern and western ends of the District.

The settlement pattern reflects this spatial variation, with most of the larger settlements on or close to the coast. Bexhill accounts for nearly half of the population, with the other, much smaller, historic towns being Battle and Rye. However, many jobs and key services are provided by larger towns- notably Hastings -outside the District. This means that close regard should be had to planning and service delivery across administrative boundaries.

Some 86,000 live in Rother. Their age structure shows a notably higher proportion of elderly compared to county, regional and national averages. This also varies across the District, with the highest proportion (35%) of people aged 65+ in Bexhill and at Fairlight (40%).

There are no sizeable ethnic minority groups in the District.

Average household income, which is an indicator of spending power, is relatively low in Rother, being below the county average and well below the regional average. This may partly reflect the high proportion of retired residents.

The Government's most recent (2004) compilation of indices of social-economic characteristics, the Index of Multiple Deprivation' (IMD) ranks Rother 181st "worst" of 354 local authority area.In other words, it is a little above the national average. There are still pockets of deprivation. In contrast, Hastings is ranked 39th most deprived district in the country.

Rother is a relatively safe place to live, with noticeably lower levels of criminal offences than both the region and country as a whole.

Educational achievement, at GCSE level, of local students is relatively high in both East Sussex and regional contexts. However, a lower proportion of people with a degree (17.7%) compared to the south-east region's average of 21.7% suggests a drift of away from the area.

This is also reflected in the types of jobs people do, with fewer than the national average in managerial and professional posts, although higher levels are found in some rural areas, notably those with closer links to Tunbridge Wells and London.

Some 23,200 people are employed in Rother. On the other hand, it compares with a total workforce of 33,800, meaning that there is net out-flow of commuters. In fact, some 40% of Rother residents work outside the district.

The rationale for this is evidenced by the difference between average earnings of residents (�502) and people working in Rother (�411).

Of the jobs in Rother, the most significant sectors are public services, followed by financial and business services and retail/distribution. About 10% of jobs are in manufacturing and 3.3% in agriculture/forestry/fishing.

Smaller firms (10 or less employees) predominate, accounting for 89% of business units. Not untypical for a rural area, there are many self-employed people.

Unemployment rates (measured by benefit claimants) are currently low, broadly comparable with the wider area. However, it has been seen to fluctuate from the regional position when the economy was weak and unemployment high, as in the early 1990s.

The total number of households in Rother is 38,800, giving an average household size of 2.2 persons, notably lower than the region or country. This is attributable to the fact that single person households account for one third of the total. The proportion is generally higher in coastal parishes.

The District has one of the highest ratios of average house prices to earnings in the South East (ESLP) and has increased over the last 5 years. This fuels the substantial affordable housing need across the District.

House-building since 1991 has averaged 229 dwellings/year.Most of this has actually been in the rural areas, although present plans should shift the balance towards the towns and especially Bexhill.

Rother has outstanding environmental qualities in its landscape, wildlife habitats and built heritage. There are ongoing national or international obligations to conserve and enhance these. Furthermore, they are integral to the character of the area.

The state of the environment is generally good but there are pressures upon it. The High Weald is subject to continuing financial pressures on agriculture and land management, as well as from development; parts of the SSSIs are defined as in "unfavourable condition"; river water quality is virtually all "fairly good" - "very good" but abstraction is increasing; all Rother's beaches meet EC Directive on bathing water quality, although only Winchelsea Beach meets its more stringent guideline standard.

(a) Population and migration trends

Anticipated population growth is shown below:

The current level of housing requirements stemming from the Structure Plan provides for an average of 275 dwellings a year over the period 1991 - 2011. It should be pointed out that house building rates are presently well short of this target, largely due to the delay in being able to release land at north-east Bexhill.

While the Local Plan will make a significant contribution to the development of more affordable homes, it cannot satisfy the high and increasing total level of assessed local housing need evidenced by the 2005 Housing Needs Study. The data suggests that house prices could continue to rise faster than local incomes.

Efforts to make housing more affordable for local people needs to be considered alongside regeneration initiatives that will increase local earnings.

Furthermore, Rother has a high proportion of one and two person households. Action needs to be taken to better match the types of housing provided with the needs of Rother's population.

(d) Climate change agenda and use of resources

In the south-east we expect to see the greatest impact of climate change within the UK. Incidences of more extreme weather are expected with flash flooding, higher sea and air temperatures and the rising of sea levels. In Rother this may translate as increased surface run off from the High Weald causing flooding and impacts on the coastal areas from storms.

The overarching aims/actions being proposed to mitigate the impacts of our changing climate are to establish effective measures to reduce net emissions of greenhouse gases by increasing use of renewable and other non-fossil fuel based energy and to work with the changing climate through adaptation.

The continuing reduction in manufacturing sectors is evident locally. While Hastings retains a relatively high number of manufacturing businesses, this may make the area more vulnerable to further contractions.

The growth potential of indigenous firms is likely to be crucial given the apparent lack of significant inward investment potential. However, the business base locally, as shown below, does not currently contain a high proportion of companies in growth sectors. 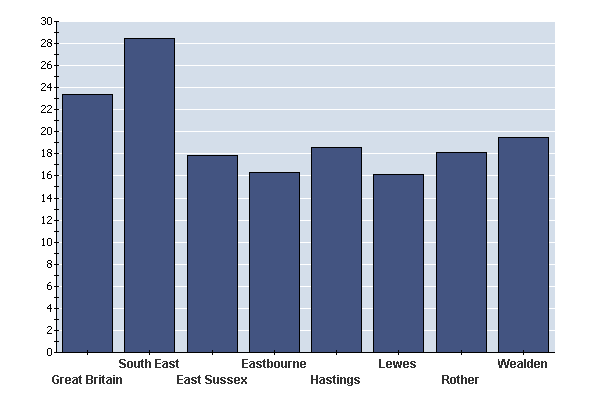 The current lack of quality sites and premises, coupled with an ageing stock, are often highlighted as issues.

Water supply and road infrastructure give rise to the greatest concern. Decisions will have to be made soon and the necessary investment put in place to sustain further growth.

The ability to serve development with the necessary infrastructure is vital. Infrastructure programmes need to work in concert with spatial strategies.

The Bexhill Hastings Link Road is perhaps the most significant single element of infrastructure as it is key to releasing employment and housing potentials. The A21 is identified for improvements over time.

Educational programmes in the light of falling school rolls and health service policies for an ageing population will be vitally important.

Advances in technology, particularly in Information Technology, have accelerated in past ten years and this trend is likely to continue. It is likely to lead to more homeworking.

Cleaner energy production and vehicles are urgently sought in order to drastically reduce carbon emissions and other forms of pollution. The renewable energy and nuclear power debate will intensify over the next year as Government will have to make decisions and provide necessary investment to avert an "energy gap".

Will increased use of the internet for grocery and other types of shopping have implications for Rother's town and village centres and the other, larger centres outside the District which Rother residents use? Will the demand for locally sourced products, particularly food, grow to significantly affect the local agricultural economy?

If there is a trend for public services become more centralised, with larger facilities serving a wider geographic area there will be implications for users' physical access to facilities. Conversely, more localised services raise issues of 'economies of scale'.

Recent Government initiatives have promoted patient choice in respect of health services, parental choice (regarding schools) and greater tenant choice for social housing. If these trends continue, what might the implications be for service delivery in Rother?

Potentially, the timeframe of the Core Strategy will see increasing use of more diverse working practices such as home and flexible working, aided by innovations in IT. This could have implications for issues such as commuting levels, childcare requirements, and the need for employment floorspace.

Overall, how will services be delivered in Rother as the proportion of working age adults in the population is set to decline over the coming years?