14.1 Battle with a population estimated in mid 2006 of 6,227, is situated within the High Weald Area of Outstanding Natural Beauty, some 6 miles north of Bexhill and 6 miles north-west of Hastings.

14.2 Being situated astride one of the principal High Weald east-west ridges, the town has grown up in a linear fashion. The land either side of the ridge falls away sharply and so development has extended over time along this ridge and the spurs, creating a ribbon of development, with a "dumbbell effect" of development at either end of the town centre.

14.3 Battle's geographic position contributed to its early development as an important communication centre with good road connections.Today Battle lies on the A2100 approximately 3 miles from the A21 London-Hastings road.Battle station is on the main Hastings - London (Charing Cross) Railway line.

14.4 The whole town of Battle and the immediately surrounding countryside is within the High Weald Area of Outstanding Natural Beauty (AONB).

14.5 The historic core of Battle - the town centre, Abbey and battlefield - was designated a Conservation Area in 1970 and reviewed in 2006.

14.6 Because of the way Battle has developed over the centuries, assuming its 'dumbbell' shape, this has visually accentuated the exposed nature of the countryside right up to its built-up historic core.

14.7 The current Local Plan's strategy for Battle is to marry the objectives below with development requirements and principles for a sustainable distribution of development. 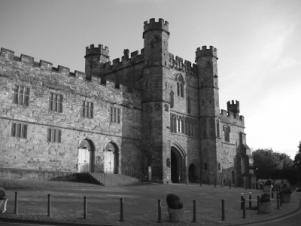 Policy BT1 Proposals for development and change in Battle should be compatible with and, wherever practicable, contribute positively to the following objectives:

(i) to maintain its historic, small town character;

(ii) to protect the historic core and its setting;

(iv) to enhance the commercial and tourism attractiveness of the town centre;

(v) to minimise the demand for cross-town vehicular traffic;

(vi) to maintain a substantial open countryside gap to Hastings.

14.8 It is recognised that the present pattern of development means that movement around and across the town is channelled through the centre. Traffic flow is exaggerated by inadequacies in the A21 and A259 around Hastings and Bexhill. The net effect is regular traffic congestion, as well as harm to the historic character and environment of the town centre.

14.9 However, a key benefit of the proposed Bexhill Hastings Link Road (and an improved connection between Queensway and the A21) will be the removal of inappropriate and unnecessary traffic from Battle.

14.10 This could provide opportunities for town centre traffic management and environmental improvements.

14.11 Pedestrian links through and around the town are relatively good.However, suitable routes for cyclists are poor. Consideration may be given to creating safe cycle routes, particularly between Claverham Community College, the High Street and the larger housing estates.

14.12 The Battle Local Area Transport Strategy (2005) provides for the provision of a safer pedestrian/cycle route between Battle and Claverham Community College with associated cycle parking, in the medium term (2 - 4 years). A feasibility study will be undertaken to provide for on-carriageway cycle routes in the area.

14.13 It also provides a framework for transport improvements and includes junction improvements at Powdermill Lane/A2100 and the Station Approach/A2100 junctions.

14.14 Also, if there were to be a new railway station at Wilting Farm on the edge of Hastings, (see previous section) this would take the pressure off Battle railway station.

14.15 A second primary school at Battle, located at Blackfriars will considerably reduce traffic crossing the High Street (A2100).

14.16 The implementation of Local Plan employment allocations at Marley Lane will necessitate improvements to the junction of Marley Lane and the A21.

14.17 These allocations are important to Battle, as there are only limited business/industrial sites in the town.

14.18 If further employment in the town is desirable, priority could be given to this in looking at any further development.

14.19 A significant amount of employment is provided in the town centre. For its size, Battle is well provided with a wide range of shops, services and community facilities, functioning as a service centre for surrounding villages. New community health facilities have recently been provided at Station

14.20 Tourism contributes to the range of services, as well as income of the town, mainly from visitors to the Abbey. A new interpretation centre is opening shortly.

14.21 The Local Plan provides for at least 220 dwellings at Blackfriars together with a second primary school for Battle and a large area of open space with woodland.

14.22 Blackfriars is regarded as a 'one off situation', in that it is seen as a sustainable opportunity for comprehensive development on a relatively large site.

14.23 In view of its Area of Outstanding Natural Beauty designation, historic core and battlefield and accessibility limitations, it is not anticipated that the Core Strategy should propose that Battle should be a focus for high levels of future growth.

14.24 Equally, as Battle is a vibrant town, with a good range of services, serving the surrounding area as well as the town itself, a 'no growth option would be incompatible with sustainability principles if new allocations are needed in the inland part of the district.

14.25 There will at least be some opportunities for development on sites within the existing confines of settlements. Two options are considered further below:

14.26 A continuation of the existing Local Plan development strategy to cover the timeframe of the Core Strategy would constitute a medium growth option for the town with some new development planned.

14.27 This could bring with it consolidation or enhancement of its service centre and tourism role by providing for example increased employment opportunities. Improving accessibility is likely to prove difficult, but improvements to managing car and coach parking are possible.

14.28 It is unlikely that another site as large as Blackfriars could be found, but it may be possible to find several smaller sites, to give approximately the same growth rate.

14.29 This option would be likely to secure the earlier construction of the second primary school already provided for as part of the Blackfriars development. Services and facilities should be retained and likely improved. However, cross-town movements may become more of an issue.

14.30 Sites would need to be identified that were not in conflict with the strategy aims, especially the need to conserve the High Weald Area of Outstanding Natural Beauty. There would be some change to the physical appearance of Battle.

14.31 In contrast, a low-growth option could largely limit development to infilling and development or redevelopment within the confines of the existing development boundary.

14.32 This approach would not rule out all outward development at Battle, but would provide less than under the existing strategy.

14.33 Best use would need to be made of any development opportunities within the town to consolidate both its role and its urban 'form'. The physical appearance of Battle would be largely unaltered.

14.34 It could limit the potential for service improvements and for meeting affordable housing and employment needs.

14.35 Of course, as a service centre for surrounding villages, development in those villages will also impact upon Battle.

14.36 It should also be noted the level of development at Battle needs to be considered alongside that in the rural areas, as they will together meet the likely requirement for development in the inland parts of the district.

(8) Question 16 - Should the current objectives for Battle be carried forwarded or amended and, if so, in what way?

(14) Question 17 - Which development option is most appropriate and why?