2.1 The land forms an arc of countryside on the urban fringe of Bexhill extending from Pebsham in the east, westwards to the north of Sidley. Figure 2 highlights its landscape features and relationship with the built-up area of the town.

2.2 The overriding landscape character of the area is of a rolling and well-wooded countryside fringe defined by a distinctive east-west ridge. Much of the allocated land is currently in agricultural use, with Upper Worsham Farm and Glovers Farm in the east, and Preston Hall Farm to the west. There is also an equestrian business and associated paddock land at Oaktree Farm.

2.3 The area will be bisected by the proposed Bexhill Hastings Link Road, the route of which is shown on Figure 3, Page 8. It will run along the former railway line from the A259 near Bexhill town centre, as far as Glovers Farm, from where it curves around the Lower Combe Valley towards Hastings, crossing the Hastings-London railway just north of Wilting Farm and connecting to the B2092 Queensway in west Hastings.

2.4 The overall development area is split by the Link Road into two sites - 'land north of Pebsham' and 'land north of Sidley'. These are the subject of Policies BX2 and BX3 respectively.

2.5 Not only are the two areas distinguished by the line of the Link Road, they have differing relationships with their surroundings. The Policy BX2 area extends well into the built-up area with a sizeable frontage to Wrestwood Road, while the Policy BX3 area has a closer relationship with the countryside.

2.6 There are discreet sub-areas within the respective policy areas, with a distinct landform, visual connectivity and landscape characteristics (see Figure 4).

2.6 Area 1 - Upper Worsham Farm extends from Wrestwood Road to the ridgeline. The ground is undulating, affording distant views towards the High Weald to the north. It is primarily an open arable farmed landscape defined by low hedges.

2.8 It is framed by areas of woodland, with Combe Wood to the north, Roundacre Wood and Pebsham Wood to the east and the woodland at The Mount to the west.

2.9 The area incorporates the group of buildings at Upper Worsham Farm, while there are smaller barns to its north east on the ridge. On Worsham Lane to the south is the Listed stone and flint Boulder Cottage. The area is well overlooked from existing housing, most notably on the Pebsham residential estate.

2.10 Area 2 - Glovers Farm is north-facing sloping land, rising up from former railway towards Glovers Farmhouse and The Mount. It is highly visible from parts of the Combe Haven and the facing slopes of the Battle-Hastings ridge to the north. It has an open character, although the woodland around The Mount provides a significant backdrop. The Mount contains an underground reservoir as well as a prominent telecommunications mast. Glovers Farmhouse, though not listed, is an historic building of some architectural interest and visual merit.

2.11 Area 3 - Levetts Wood and Oaktree Farm is a landscape of gently rolling, enclosed, well wooded countryside and small hedgerows. Levetts Wood, an ancient woodland, provides a buffer to existing housing development at Sidley. The grazed fields create an impression of a woodland clearing. The land slopes gently down to the north, towards Combe Haven. The sunken Buckholt Lane, with its species-rich hedges and fringing trees, cuts through the area. The only buildings are those at Oaktree Farm.

2.12 Area 4 - Preston Hall Farm is agricultural land around the Farm complex. It is bounded by the small but significant Redgrove Wood and adjoining hedgerow to the north-west, a private lane (also a public footpath in part) to the Listed Preston Hall and Preston Hall Cottage to the north, and a strong hedgerow separating it from the public open space to the east. The area adjoins and is overlooked by relatively recent housing off Watermill Lane to the south. The land slopes generally down to the north-east, but is also bisected by a ditch. There is a small pond just west of Preston Hall Farm. 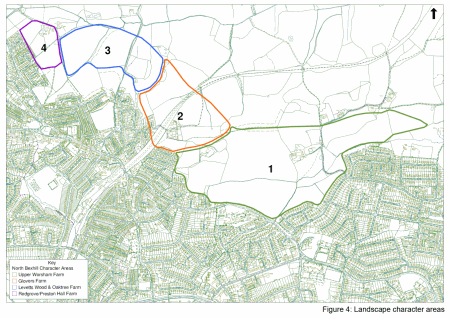 2.14 In particular, the abundance of ancient species-rich hedgerows, some with specimen trees, provide habitats for a wide range of birds, small mammals and invertebrates, as well as flight lines and feeding routes for bats. They also host a variety of significant plant species. North to south running hedgerows, which link to the landscape beyond, are most important.

2.15 As well as bats, there are other protected species, notably badgers, as well as dormice in the area.

2.16 Character Areas 2, 3 and 4 drain into the Combe Haven to the north, while Area 1 - Upper Worsham Farm drains into the Pebsham Stream (which joins the Combe Haven nearer the coast). The latter extends through the middle of the area in a prominent fold in the land running roughly parallel with Wrestwood Road to the south. There are also smaller streams feeding into the Combe Haven in the west.

2.17 There are no significant archaeological areas of interest within the site boundary. However there is a possibility there may be evidence of prehistoric and Roman activity in the area.

2.18 The area has historically been in agricultural use. Field patterns largely follow those established in the 19th century. Historic data indicates that many of the farmsteads, such as Middle Worsham have all but disappeared other than remaining barns.

2.19 There are very few buildings on the site, and, with a few exceptions, are largely modern agricultural structures of little value. There are however three grade II listed buildings: Preston Hall Farm, Preston Farm Cottage and Boulder Cottage, and the historic farmhouse at Glovers Farm and a few traditional barns.

2.20 The site forms a buffer between the residential neighbourhoods of Pebsham and Sidley and the farmed countryside to the north.

2.21 Sidley began as a medieval settlement, and remained a village in its own right until it became absorbed within Bexhill. It is an active community with a district centre with shops and community facilities along the spine of its high street.

2.22 Sidley has grown with the incremental addition of residential streets from Victorian times through inter-and post-war to more recent housing of 1980s and 90s. There is a high concentration of social housing. Some areas have been protected from development and form recreation space and allotments.

2.23 The urban form of Pebsham is more representative of a large suburban estate, springing from its Victorian roots. The majority of properties date from the 1960s and 70s.

2.24The location of existing community facilities in the locality is shown on Figure 5.

2.25 Being largely farmland, there is very limited vehicular access into either site at the current time, other than at Worsham Lane off Pebsham Lane and Buckholt Lane off Glovers Lane. Buckholt Lane is an attractive lane that predominantly serves as a footway and bridleway, while Worsham Lane again has a strong and attractive rural character, and also provides access to the countryside to the north as well as to frontage properties.

2.26 There is a network of Public Rights of Way across the sites (see Figure 5), but there is little direct access from existing adjacent residential areas. There are several potential connections for vehicular or pedestrian only access to maximize connectivity to both existing Pebsham and Sidley communities, and provide a strong network of movement routes. 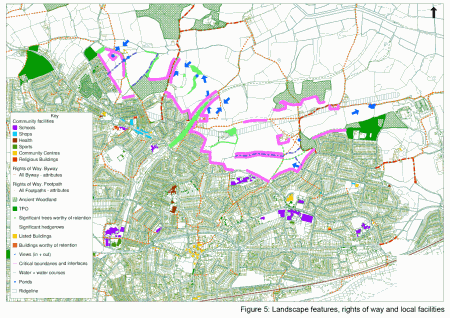