3.1 The intention of major development to the north-east of Bexhill has been long-standing.

3.2 In July 1985, the Bexhill Local Plan identified the Worsham area for a new community of up to 3,600 people together with associated facilities, including jobs, to follow completion of the Hastings Town Development Scheme (TDS) and linked to new jobs and infrastructure.

3.3 It is notable that such growth was intended 'to give local young people a significantly better opportunity than at present to remain in Bexhill and contribute to its well-being'.

3.4 That proposal itself followed from the County Structure Plan which favoured north east Bexhill as 'its proximity to the Hastings TDS offers a good opportunity of linking homes and jobs', and 'is also convenient for the provision of a new road linking Bexhill and Hastings and improving the access to facilities between the two towns'.

3.5 The later, 1991 Structure Plan also proposed a major allocation of land for a "flagship" Business Park to the north of Bexhill. This and the "new community" were carried forward through the 'North Bexhill Strategic Framework' in 1993. This envisaged the new residential community of 1,000-1,500 dwellings at Worsham and a Business Park of some 40 hectares, providing about 2,000 jobs to the north of Sidley.

3.6 These proposals were subsequently reviewed in the light of more recent circumstances, including the Government's decision to axe the Bypass schemes, as part of preparing the current Local Plan.

3.7 The adopted Rother District Local Plan (July 2006) policies - BX2 and BX3 - are reproduced in Appendix 1. The general location of land uses is shown on Inset Map 1a of the Local Plan - see Figure 1.

3.8 Policy BX2 primarily allocates land for housing (and associated facilities), although also with significant provision for business land closer to the Link Road. The land north of Sidley is covered by Policy BX3 and is allocated predominantly for employment development, with a smaller area of housing in its south-western corner.

3.9 North East Bexhill is by far the most significant area for housing and is regarded as a longer-term allocation that will have a key role in fulfilling housing supply requirements in the emerging South East Plan, as well as the Local Plan.

3.10 Similarly, the employment land, well related to the Link Road, will provide the main location for business development in the medium - long term.

3.11 The Local Plan recognises that business development must be a priority in the development of north-east Bexhill. Also if carefully planned, it can provide the focus for sustainable growth based on the long-term advantages of providing modern, high quality accommodation with good connections to the transport network.

3.12 The Plan also highlights the need to protect the rural landscape setting of the town, by the creation of a robust, long-term edge, with development contained from the wider countryside by well-defined topographical and landscape features.

3.13 Policy BX4 allocates the open land between Bexhill and St. Leonards as a 'Countryside Park', as elaborated upon below.

3.14 Other relevant Local Plan policies include HG1, HG3 and HG4, which relate generically to housing developments in the District, and advise on housing mix, affordable housing, layout, design and access, and GD1, which relates to design generally, and the impact of development on natural features and resources.

3.15 In addition, land for the proposed Link Road, (the progress of which is reviewed below), is safeguarded by Policy TR1.

3.16 The existing road network, and specifically the A259 between Bexhill and Hastings, is already over-capacity and could not accommodate the further traffic generated by the development. Therefore, as both Policies BX2 and BX3 indicate, it is essentially dependent upon the proposed Link Road to create that capacity.

3.17 The Link Road has been accepted in principle by Government and is included in the Regional Transport Strategy and the programme for funding in 2006-2011.

3.18 A planning application for the Link Road has recently been submitted, and is subject to various statutory procedures. Assuming these are successfully concluded, work may start in 2009 and be completed by the first half of 2011.

3.19 The relationship between the development and the Link Road is discussed under 'Access' principles in Section 5.

3.20 Policy BX4 of the Local Plan (see Appendix 1) identifies a large area - approximately 600 hectares - between Bexhill and Hastings as a 'Countryside Park'. It extends from the coast into the Combe Haven valley, including the current landfill site, a SSSI and areas of farmland, up to the northern edge of Pebsham and the BX2 area. A tongue of land also extends up to the edge of the existing built-up area of Sidley just west of the Link Road.

3.21 The Countryside Park will be developed for recreational activities and nature conservation alongside continuing agriculture, whilst remaining mainly open. It will also serve to provide a permanent "green gap" between the urban areas of the two towns.

3.22 Since 2003, the three local authorities concerned with the area - East Sussex, Hastings and Rother - have been working together to make the 'Park' a reality. To date, following a major local consultation, a 'Development Strategy' has been prepared in outline form and approved by the member Councils. The conceptual masterplan from this is reproduced as Figure 6. 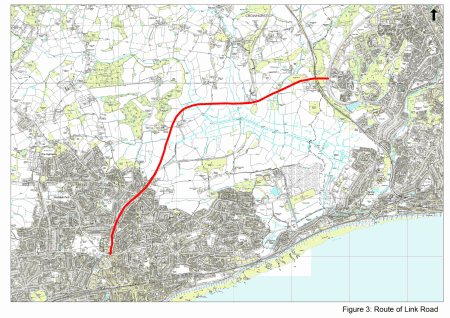 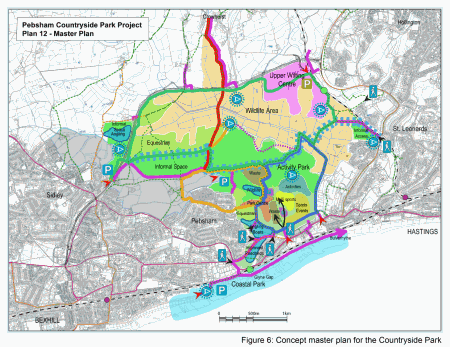