The Council is proposing the introduction of a Community Infrastructure Levy (CIL) in Rother in order to secure financial contributions from new development to help fund infrastructure.

Your comments and views are welcomed on the CIL: Preliminary Draft Charging Schedule as well as on the ‘Draft Regulation 123 List’, which sets out the range of infrastructure that CIL receipts may be used for. The consultation period runs from 8th August 2014 to 26th September 2014. All responses must be received by 4.30pm on the 26th September 2014. Comments received will help the Council prepare its Draft Charging Schedule which will be published to allow formal representations prior to independent examination of the proposed Levy.

The Preliminary Draft Charging Schedule and Draft Regulation 123 List should be read in conjunction with the following supporting documents:

All documents will be made available for inspection at the Council’s Customer Help Points (CHP) at the Bexhill Town Hall, Rye CHP and Battle CHP throughout the consultation period. They are also available on-line at: www.rother.gov.uk/CIL

Alternatively you can complete the representation form which can also be found at: www.rother.gov.uk/CIL and return it:

By email to: planning.strategy@rother.gov.uk or;

By writing to us at:

In making representations to the Preliminary Draft Charging Schedule and Draft R123 List please set out your comments in response to the questions raised in the document.

What is the Community Infrastructure Levy (CIL)?

1. The Community Infrastructure Levy (CIL) is a new charge which local authorities in England and Wales are empowered to charge on most types of new development in their area. CIL was introduced by the Planning Act 2008 and defined in the CIL Regulations April 2010 (as amended). It is the Government’s preferred mechanism for securing developer contributions towards local and strategic infrastructure improvements. Once a ‘charging schedule’ has been adopted, all new planning applications that first permit development are liable to pay CIL (i.e. outline or full planning applications).

2. CIL allows local authorities (known as "charging authorities") to raise funds from developers undertaking new developments in their area. The money can be used to fund a wide range of additional infrastructure that is needed to support sustainable development. The Planning Act 2008 provides a wide definition of infrastructure that can be funded through the CIL levy. This includes:

The benefits of CIL

3. CIL is considered to be fairer, faster and more certain and transparent than the current system of planning obligations1 which are generally negotiated on a ‘case-by case’ basis. The key benefits that CIL would bring are:

4. While CIL is not compulsory, the Council considers it important to progress a CIL expeditiously, as legislative changes will make it more difficult for the Council to secure developer contributions to fund essential infrastructure and mitigate the impact of development through Section 106 Agreements. From April 2015, no more than five s.106 obligations can be pooled towards one project or type of infrastructure. Hence, CIL receipts are necessary to contribute towards the provision of infrastructure to support the level of development envisaged in the Local Plan Core Strategy.

Do you agree that Rother District Council should introduce a CIL?

How is CIL applied?

5. New buildings and extensions to buildings which are over 100 sqm gross internal floorspace are liable for CIL. All new dwellings regardless of size are liable for CIL. The levy is charged on pounds per square metre on the net additional increase in gross internal floor space of a development. In calculating CIL, the Council are is required to take into consideration any floorspace of existing buildings being replaced. Once CIL is adopted it is non-negotiable and enforceable. The formal calculation methodology is provided in Regulation 40 and Part 5 of the CIL Regulations 2010, as amended, and can be found in Appendix 1.

Infrastructure and the Funding Gap

6. The charging authority must use ‘appropriate evidence’ to inform the preliminary draft charging schedule. It is the obligation of any potential charging authority to demonstrate that a funding gap exists to justify charging the levy and that this can be demonstrated through an Infrastructure Delivery Plan.

7. Rother’s Infrastructure Delivery Plan (IDP) was most recently updated in June 2014. The IDP provides a comprehensive but not exhaustive list of infrastructure necessary to support future development in the district up to 2028. However, this is based on continually updated information and is, hence, a “live” document.

8. The IDP objectively assesses development and infrastructure requirements and identifies the infrastructure and services required to support levels of growth set out in the emerging Local Plan Core Strategy. As far as it has been possible, the IDP also identifies the costs, timescales and the details of how these schemes should be funded, including funding already secured, funding through public finance and developer contributions sources, and funding gaps

10. The infrastructure gap analysis does not directly relate to determining the rates at which CIL should be set locally. It provides the evidence that there is overall an infrastructure funding gap that could be filled through CIL. The rate setting of CIL is determined by financial viability analysis.

Do you agree that there is a clear infrastructure funding gap?

11. In November 2013, the Council appointed Peter Brett Associates (PBA) to undertake an independent viability analysis of the district and provide clear recommendations to the Council if the introduction of a CIL charging schedule was viable; could differential zones be supported and at what level could the charge be set having regard to the nature of the District, the current and emerging Local Plan.

12. As part of the viability assessment to support the introduction of a CIL the consultants held an informal workshop with local development stakeholders in November 2013 which also contributed significantly to inform the study. The findings of the viability assessment undertaken by PBA are set out in their report. This provides the basis for the Council to propose a differential CIL rate, reflecting the fact that the viability evidence shows that different types of development or different geographical locations or zones can afford to pay different levels of CIL.

13. The charging authority must also have regard to development viability and undertake an assessment of the likely level of CIL that may be levied without putting development at risk. The rate should be set at a level that balances the requirement for infrastructure to support development against the potential economic impact of imposing the Levy across Rother. The need for this balance is set out in regulation 14(1) of the CIL Regulations, which states that the charging authority must "strike what appears to the charging authority to be an appropriate balance" between the desirability of funding infrastructure from the Levy and "the potential effects (taken as a whole) of the imposition of CIL on the economic viability of development across its area".

14. The viability assessment undertaken by PBA has recommended there is scope to introduce differential residential charging zones across four areas of Rother. These are Battle, Rural North and West/Rye and Rural East/Bexhill/Strategic allocations2; see Figure 1. Bexhill is subdivided into two zones - West and East - as shown on Figure 2.

15. The proposed CIL rate in each CIL zone, as approved by the Council for the purposes of consultation, is shown in Table 1. 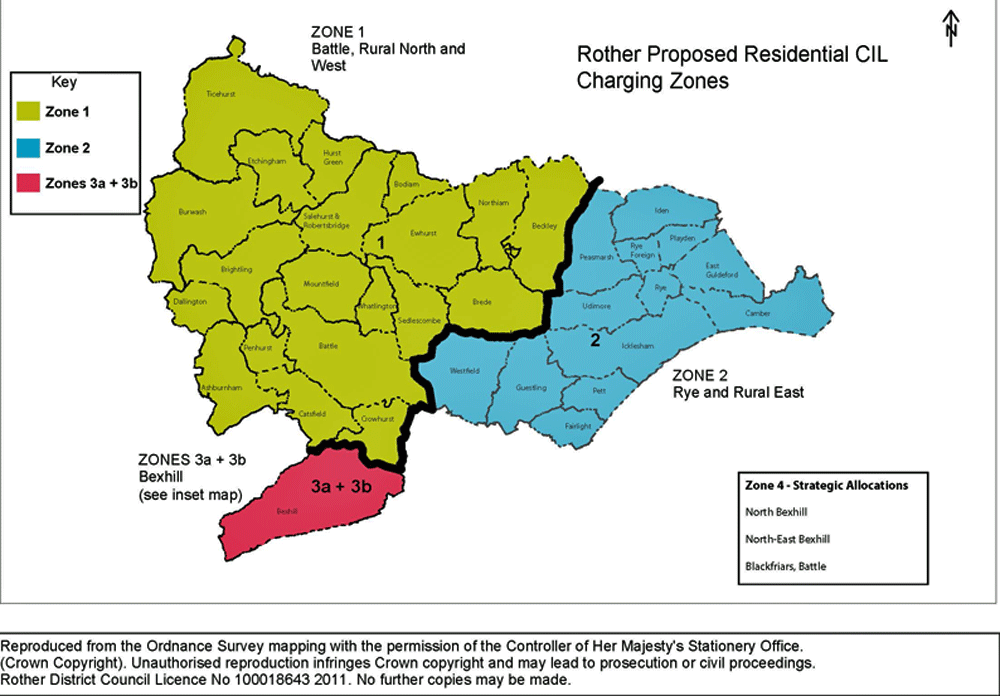 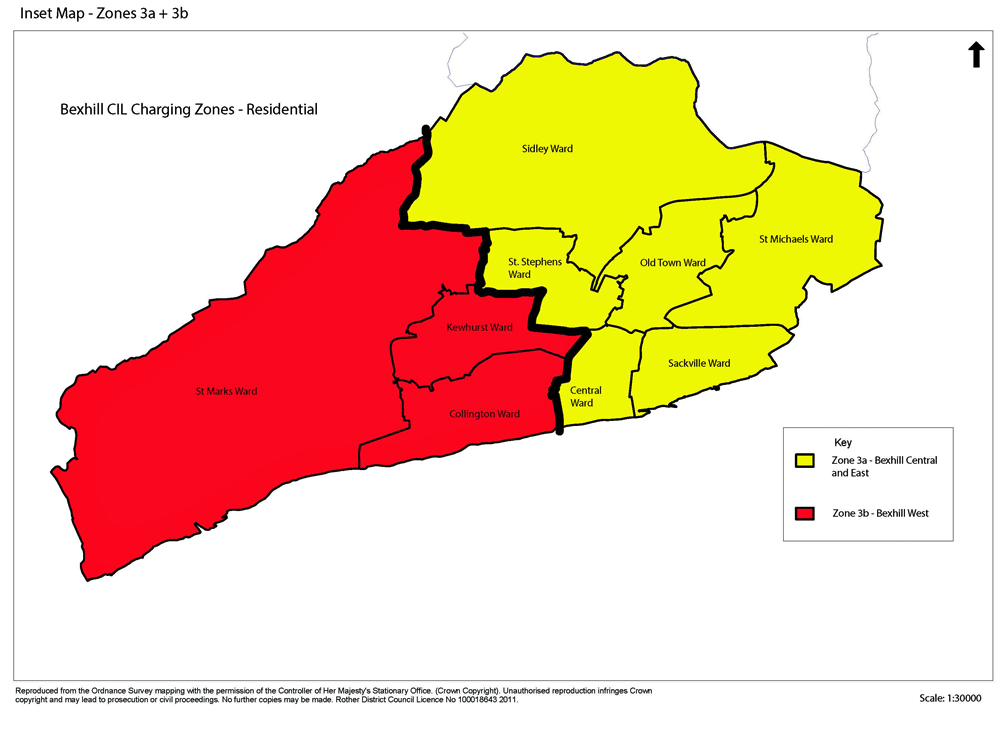 Do you agree with the proposed residential CIL charging zones?

Do you agree with the proposed CIL charge rates for residential uses?

Do you agree with the proposed CIL rates for non-residential development?

When is CIL payable?

17. When planning permission is granted to CIL liable development, a liability notice will be sent which will contain the amount of CIL that is due for the development, including when the total amount must be paid. The Regulations state that CIL liability is payable in full at the end of the period of 60 days, beginning with the intended commencement date of development, unless the charging authority has adopted an instalment policy. Regulation 70 provides for payment by instalment if such a policy is in place. The Local Authority is free to decide the number of payments, the amount and time due, but, (under Regulation 68B) must publish an instalment policy on their website. This may be revised when appropriate.

18. CIL Guidance notes that having an instalment policy in place could be considered as a material consideration in assessing the viability of proposed CIL levy rates. In the majority of cases, developments do not generate a profit until partly or fully completed; hence, by having an instalment policy in place, it would assist the viability and delivery of development in Rother.

19. The Council is inviting views from consultees on the potential introduction of an instalment policy and what form this should be. This is not part of the charging schedule and may be published at a different time.

Do you support the introduction of an instalment policy in Rother for CIL payments?

20. The Regulations allow mandatory relief for affordable housing and certain types of developments. Affordable housing will continue to be delivered through Section 106 Agreements. Also excluded from CIL is self-build housing. The CIL Regulations exempt the following from paying the CIL:

21. The CIL Regulations allow for the Council to provide further relief, at their discretion. The Council do not have to offer this relief, but if they chose to do so, they must adopt a discretionary relief policy. This is not part of the charging schedule and may be published at a different time.

22. The Council has not made a formal decision on whether it will offer discretionary relief or exceptional relief policy in accordance with the CIL Regulations.

Do you have any views on whether the District Council should introduce a discretionary and exceptional relief policy?

Do you agree with the proposed draft R123 list?

24. The current timetable towards the adoption of the CIL charging schedule is set out below. It will be subject to regular monitoring in order to introduce an appropriate CIl as soon as practicable.

Do you have any further comments on the PDCS?